Turkish toy market growing and exports are increasing year by year but slowly. Export growth is noticeable in the eco-friendly wooden toys as compared to the plastic and electronics toys categories.

In Turkey, toy exports in 2017 consumed about 6,000 tons of raw material plastic and stood at around $34 million dollars.

The company started in the plastic sector in 1993  with unique product innovations. They started by producing plastic bottom holders for sun umbrellas. They grew to become the number one in Turkey with its product variety and quality.

PRENS-PRENSES brand started in 2000. In 2005,  they invested in the kid’s game sector, educational game tools and started to produce game groups with the brand KING KIDS. The company exports to 65 countries. They utilize a 10,000 m.sq. production facility. King Kids is a proud positive contributor to the country’s economy and balance of trade.

Şimşek Toys was established in 2010 to operate in the field of plastic toys and children’s ware. Since its inception, the company has increased its product diversity. The company specializes in Plastic riding toys, playhouses, and baby toys.

Founded in 1978 in Istanbul, ÖZ BAYRAKTAR OYUNCAK has always prioritized customer satisfaction and product quality by focusing on the production line and sales strategy. With over 35 years of experience in the field of toys, the company has taken its place among the respected companies in Turkey. ÖZ BAYRAKTAR OYUNCAK produces products suitable for children’s health by using the highest quality raw materials and constantly attaches importance to R & D activities in order to help children’s development and creativity. ÖZ BAYRAKTAR OYUNCAK, which has been responding to the needs of the toy industry with its original designs since its inception, has made a name with Çınçın brand and has taken an important place in the sector.

Are you a Turkish Toy manufacturer and exporters?

What is a B2B wholesale market? How does it work? 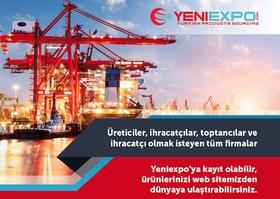 We invite all Turkish export companies to join

This site uses Akismet to reduce spam. Learn how your comment data is processed.

We use cookies to ensure that we give you the best experience on our website. If you continue to use this site we will assume that you are happy with it.OkPrivacy policy